Posted by Staff on Sep 2014 in Advocacy, All Stories, Features, News Updates | 0 comments

ONPHA’s 2014 Waiting Lists Survey found that more than 165,000 Ontario households are waiting for rent-geared-to-income (RGI) housing. That means that 6,623 (up 4.2 per cent) families, seniors, couples, and single adults joined waiting lists in 2013. 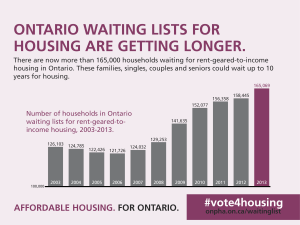 This year’s report reveals the highest total since ONPHA began collecting waiting list information ten years ago. Since 2003, more than 40,000 households have joined the queue for RGI housing.

Wait times can vary from several months to almost 10 years, depending on the type of application and the local availability of RGI housing. In 2013, the average wait time across Ontario was 3.89 years, up from 3.2 years in 2012. Of all households, families faced the longest wait times, at an average of 4.14 years. 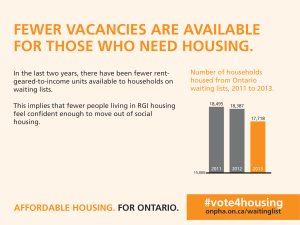 Rising housing costs, combined with a lack of affordable rental housing in certain communities, has put pressure on many households. While Ontario’s unemployment rate has decreased since 2009, the rise in part-time and precarious work has made it difficult for some families to afford basic necessities. As a result, one in every three rental households in Ontario lives in housing that is too small for their family size, too expensive, or badly in need of repair.

Other areas have explored the option of establishing Housing Development Corporations, which create alternative financing and partnership mechanisms to build affordable housing. Some service managers have dedicated funding to increasing the number of shelter spaces for individuals facing homelessness, creating eviction-prevention programs to keep people housed, and pioneering advocacy campaigns to increase the amount of affordable rental housing and promote investment by senior levels of government. 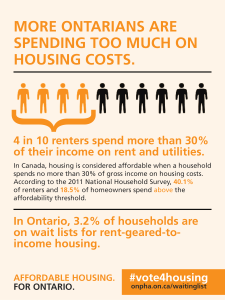 The 165,069 households on waiting lists are some of the thousands of Ontarians who are struggling to afford housing in our province. To provide them with a safe and secure place to call home, permanent, dedicated funding from senior levels of government is required. While the federal and provincial governments’ recent renewal and expansion of the Investment in Affordable Housing program is a positive step, a longer term program and funding commitment is needed to address growing waiting lists.