Posted by Staff on Feb 2015 in All Stories, Features | 0 comments

Non-profit organizations across the province are creating Housing Development Corporations (HDCs) to stimulate development and ensure the sustainability of affordable housing. Three Ontario regions – Cochrane, Waterloo, and London – are using HDCs, all for different purposes. These separate corporations allow providers the flexibility to go beyond the legislated mandates of social housing providers. 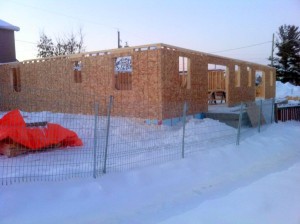 Six-plex under construction in Cochrane, ON.

The District of Cochrane amended corporate objects of the existing Cochrane District Local Housing Corporation to create a housing development corporation. The newly-purposed corporation has already acquired three single detached properties and is currently constructing a six-plex for transitional housing for people who have experienced domestic violence. Another eight projects are in the early stages of development, including a subdivision (a mix of detached and low-rise units).

“The strategy with the greatest risk in our sector is inaction. If you are waiting for your Service Manager or large providers or anyone else you are missing the boat. It is irresponsible to not leverage our assets to create or take advantage of opportunities. A HDC is a great tool to enable and carry development opportunities.”
– Brian Marks, Director of Housing Services, District of Cochrane

In the Region of Waterloo, an existing HDC whose assets were transferred was held as a shell corporation and then revived in January of 2015 with a new purpose. The HDC can assume assets from other housing providers (temporary or long-term), including Projects in Difficulty, and could acquire or redevelop new community housing in the future.

In London and Middlesex, a new corporation was created as a separate entity with the City as the sole shareholder. The new HDC has a clear focus on housing development and will not operate housing. The corporation provides a central point of contact for new affordable housing projects.

“We worked with stakeholders, researched other models, studied the local market and landscape, and created the HDC with a focus on mandates and strategic objectives. It allows us to respond quickly to new opportunities and explore opportunities outside of the existing models. We have the ability to focus on gaps/niche in current housing market.”
– Louise Stevens, Director of Housing, City of London