Posted by Staff on Feb 2015 in Advocacy, All Stories, News Updates | 0 comments 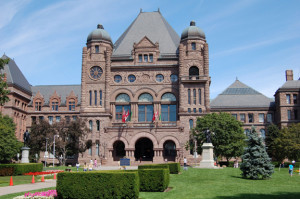 This spring, the Ontario government will table its 2015-16 budget, which is expected to be a tight balance between fulfilling the Province’s social justice agenda, maintaining commitments to infrastructure investment, and continuing to eliminate the debt. ONPHA was invited to provide feedback as part of the Province’s pre-budget stakeholder consultation process.

ONPHA’s pre-budget submission praised the Wynne Government for the positive steps they’ve taken to reduce poverty. In particular, ONPHA recognized the Province’s extension of the Investment in Affordable Housing Program, their call for greater collaboration between ministries, and their commitment to a poverty reduction strategy that includes investments in supportive housing and homelessness prevention.

Still, the non-profit housing sector faces many challenges. There are more than 165,000 households on waiting lists for subsidized housing and the province’s social housing stock is aging and requires reinvestment to remain viable.

In the budget submission, ONPHA called on the Province to:

1. Give MCSS-administered housing providers a fair deal. In 1999, some housing providers were transferred to the administration of the Ministry of Community and Social Services (MCSS). During the transfer, a Memorandum of Understanding was signed between the Ministry of Municipal Affairs and Housing and MCSS that called for annual cost factor increases to the budgets of these housing programs. To date, MCSS has applied an annual cost factor of one, which has held budgets flat below the rate of inflation. ONPHA has asked the Province to increase the budgets of these housing providers to reflect the real costs of doing business in 2015.

2. Guarantee loans for Ontario’s non-profit housing sector. Many non-profit housing providers lack the debt-to-income ratio required by traditional lenders. Others may be able to service debt only after cost-saving improvements have been made to their properties. ONPHA has asked the Province for a credit guarantee which would help housing providers reinvest in their infrastructure.

4. Invest in the future by expanding ONPHA’s Mentorship Program. Like many knowledge-based sectors in Ontario, the non-profit housing field is facing a generational turnover. Many leaders, with decades of experience, will be retiring. With the Province’s support, ONPHA recently completed a three-year pilot Mentorship Program, which paired retired sector experts with new leaders and board members. ONPHA has asked the Province to fund the program for five years.

ONPHA also reminded the Province of the need for continued investment in building and maintaining affordable housing, and for supports to ensure that people leaving homelessness can maintain their housing.