Posted by Staff on Feb 2015 in All Stories, Features, Slider | 0 comments 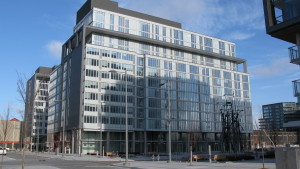 Toronto’s West Don Lands area is undergoing rapid changes: the former industrial brownfield is being developed into a mixed-income village to house athletes coming to Toronto for the 2015 Pan Am and Parapan American Games. After the medals are awarded and the competitors leave, Infrastructure Ontario will convert the athletes’ village into affordable housing that will blend with the neighbourhood’s mix of market condos.

Nestled between the Distillery District and the Don Valley Parkway, the development has been designed as a complete community, with access to transit, highways, recreational trails (including the new Corktown Common Park), marshlands, and the waterfront. A new YMCA building and student residence for George Brown College are also being planned. The neighbourhood, now nicknamed the Canary District, will include a mixture of private market, affordable, and non-profit homes.

After requesting competitive bids to own and manage the social housing units built from the athletes’ village, Infrastructure Ontario awarded the task to two local agencies: Wigwamen and Fred Victor. 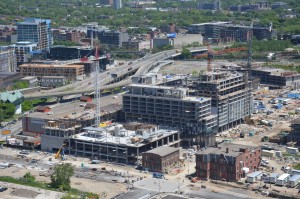 The competition to operate the new buildings was a “rigorous, two part process,” says Wigwamen General Manager Angus Palmer. “First we had to submit an expression of interest. Out of those [Infrastructure Ontario] shortlisted six non-profits. We were then required to put in a more detailed proposal, including operating and capital budgets for both buildings.”

Palmer believes Wigwamen’s experience in managing a large, diverse portfolio; its strong partnerships with the Ontario March of Dimes (OMOD) and Accommodation, Information, and Support Inc. (AIS); and the equity they will contribute to the project may have been factors that helped them win the bid.

Wigwamen will be acquiring a 12-storey LEED Gold building with 145 units which range from one to four bedrooms. A total of 31 of the 145 units will be fully accessible and equipped with remote door-operators. In addition to renting units to members of the Aboriginal community, and clients of OMOD and AIS, units will be available for rent to amateur athletes and members of the general public. Rents will be set at or below 80 per cent of the average market rent.

Mark Ashton, CEO of Fred Victor, felt this was a good opportunity for a new location as the neighbourhood will include a mix of market and non-profit housing. “Externally, Fred Victor units will be indistinguishable from the market-rent condominiums,” he says.

The Fred Victor building is ten storeys and will house up to 300 people in 108 units. Apartments will be a mix of one to four bedroom units, ensuring the community will include singles, couples and families. The organization will work with local partners, such as LOFT Community Services and Pace Independent Living, to ensure tenants have the supports they need to thrive in their new homes.

The West Don Lands have a long history and many attempts to revitalize the area have failed. In the late nineteenth century, the site included factories, warehouses, and pork processing facilities. After deindustrializing, the brownfields sat for decades, unusable due to contaminated soil and a risk of flooding from the Don River. In the early 2000s, long before the Pan Am Games bid, Infrastructure Ontario and Waterfront Toronto began work to revitalize the area. After the city won the bid, work on the project increased with the need for an athletes’ village. A flood berm was built and necessary environmental work was completed to make the ground suitable for residential use.

Designing the athletes’ village buildings was a significant challenge; the architect had to consider both the needs of the athletes and of the buildings’ future residents. The units needed to meet the requirements of the International Olympic Committee and the specifications of the non-profits and private developers who would be given the space after the games.

Infrastructure Ontario included Wigwamen and Fred Victor in the design stage, ensuring the plans would be suitable for their clients. Once the games have finished, the developer, Dundee Kilmer, will have just a couple of months to add kitchens (the athletes eat in a shared dining tent), remove temporary walls, replace the flooring, and install finishes.

The transition from athletes’ village to inclusive community is expected to finish in early 2016 with residents moving into the Wigwamen and Fred Victor buildings in the spring.