Posted by Staff on Feb 2015 in All Stories, Features, Slider | 1 comment 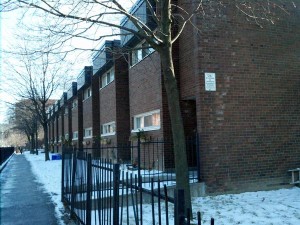 To an outsider, Toronto’s Alexandra Park neighbourhood might not seem a welcoming place at first. The neighbourhood, comprised of medium-density public housing, seems to face inwards, its brick row houses turned away from the busy streets that border the neighbourhood. Inside the development, pedestrian laneways twist around apartments and shared courtyards, creating a loose labyrinth in the space between the buildings.

When the neighbourhood was conceptualized by planners in the 1960s, their aim was to build a closed community with a small-town feel for low-income residents living west of the city’s core. In many ways, they succeeded. Community spirit has always been strong in the neighbourhood – parents watch each other’s children and residents take pride in their homes. In the 1990s, when drug wars plagued the area, residents worked to convert a portion of the government housing complex into a self-governing housing co-operative, Atkinson Co-op.

With help from former city councillor Adam Vaughan, community members approached Toronto Community Housing (TCHC) and suggested that the neighbourhood be included in TCHC’s Revitalization program. The partnership between TCHC and the Co-op is the first of its kind in Canada.

“In Alexandra Park, revitalization is the result of years of engagement with the local community,” says Greg Spearn, TCHC’s Interim President and CEO. “Residents were engaged from the beginning. In this community, we work closely with an advisory group and the Atkinson Board of Directors. These groups helped to determine the scope and plan for the revitalization, participated in the hiring of the architect, and liaise with the local community.” 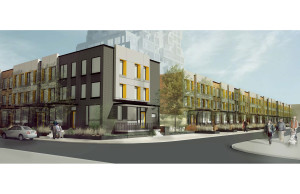 A rendering of the new rental townhomes prepared for TCHC by LGA Architectural Partners.

As part of the revitalization, Atkinson and TCHC will work with a private developer to replace 333 and refurbish another 473 rent-geared-to-income units. Tridel is the partner for Phase One. The cost of these upgrades is being offset through the creation and sale of 1,540 units of market-rate housing. Demolition and construction began in 2014 and the project is expected to take 12 to 15 years to complete.

Revitalization will transform the area, adding a mix of low- and high-rise homes to keep ‘eyes on the street’ and increase neighbourhood density. New roads will help connect Alexandra Park to the surrounding city. To preserve the character of the neighbourhood, new streets will give priority to pedestrians, cyclists, and people using mobility devices. One new road, nearly complete, was named by the community in recognition of a former resident, Paul Lane.

Consultation with residents has been an integral part of the project. At the insistence of community members, the revitalization process is being guided by a zero-displacement principle. Construction will take place in slow waves, allowing TCHC and Atkinson to use existing vacancies to move residents between buildings.

The consultation process and zero-displacement principle have also helped to build trust between Alexandra Park residents, TCHC, Atkinson Co-op, and the developer.

“When people see that the process is fair, that’s when they participate,” said Colleen, an Alexandra Park resident who co-led a tour of the neighbourhood on National Housing Day.

In recognition of this collaboration, the Canadian Institute of Planners awarded the Alexandra Park Revitalization Plan their 2014 Award for Planning Excellence for Neighbourhood Planning. When construction in the neighbourhood is complete, the end result will be a vibrant mixed-use, mixed-income community that’s connected to the rest of the city.