Posted by Staff on Apr 2015 in Advocacy, All Stories, News Updates, Slider | 0 comments 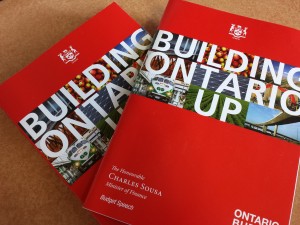 While the budget does not include any new funding specifically for housing, ONPHA recognizes the commitments already made with the five-year extension of the Investment in Affordable Housing program. The Province also plans regulatory reform through a revised Long-Term Affordable Housing Strategy which could also impact the Housing Services Act.

Of concern in yesterday’s budget are social assistance rates, which despite a modest increase of 1 per cent continue to be too low to afford housing in many communities. ONPHA is currently conducting a research project to explore options to better help households meet their housing affordability needs.

Going forward, ONPHA will continue to advocate to senior governments for dedicated and flexible long-term funding for social and affordable housing.

Last February, ONPHA was invited to contribute input on the provincial budget. Click for details on ONPHA’s 2015 pre-budget submission.