Categories Menu
Home » Advocacy » How much do you need to earn to afford to live in your city?

Posted by Staff on Apr 2015 in Advocacy, All Stories, Features, Slider | 1 comment

How much do you need to earn to afford to live in your city? 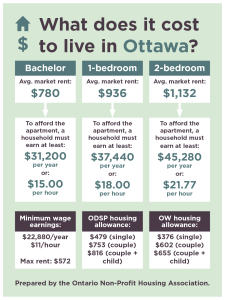 A one-bedroom apartment in Thunder Bay might rent for $738/month. A similar apartment in Ottawa might rent for $936/month or, in Toronto, for $1,067/month. In Ontario, we accept that living in large cities often costs more than living in smaller communities. Workers and professionals may earn higher wages in large cities to compensate for a higher cost of living. For city-dwellers earning low wages or relying on social assistance, a higher cost of living may bring additional hardship.

Assuming that no more than 30 per cent of before-tax income is spent on housing (a generally accepted limit for affordability), ONPHA has calculated the minimum annual income a household must earn in order to afford the average private rent in each of these cities. We’ve also broken that annual income down into an hourly wage (assuming a 40 hours a week, 52 weeks per year). 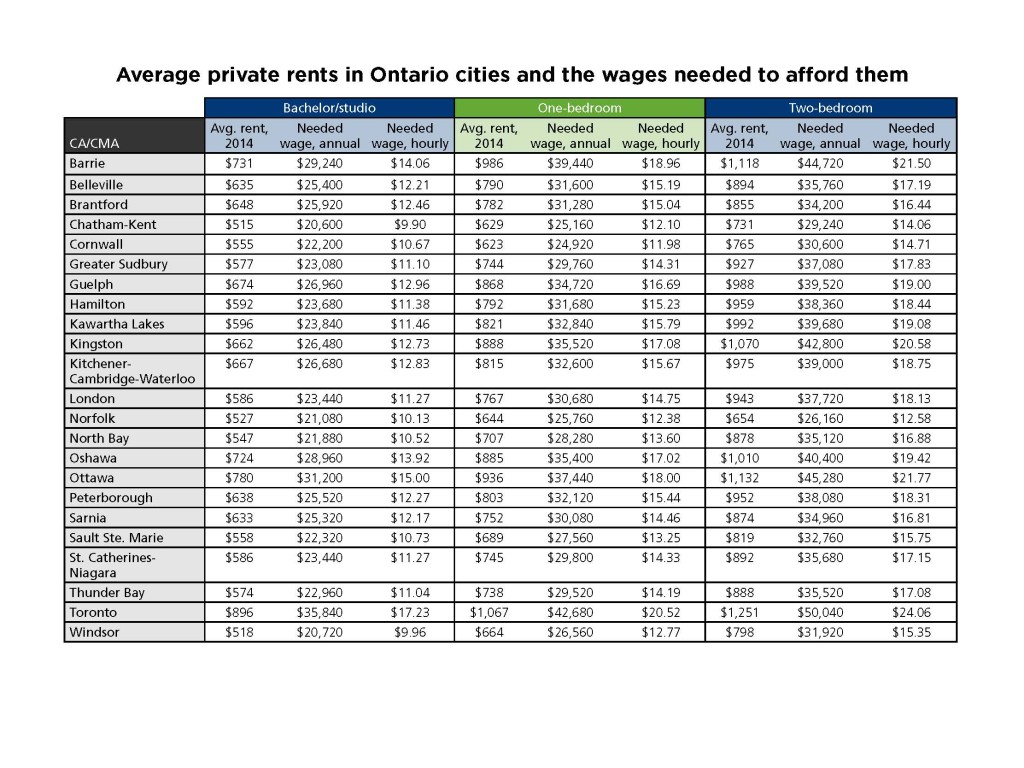 See the chart in a pdf here: HW spreadsheet. 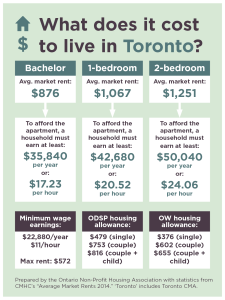 The results provide a strong argument for the need for affordable housing, especially in Ontario’s largest cities, where waiting lists for rent-geared-to-income assistance remain stubbornly high.

A minimum wage earner in Ontario makes $22,880 a year (before taxes) and, using the 30 per cent measure, could afford to spend up to $572 per month on housing costs. Six Ontario cities in the CMHC rental statistics report have average private rents for bachelor or studio apartments at or below that amount: Chatham-Kent, Cornwall, Norfolk, North Bay, Sault Ste. Marie, and Windsor. (No cities in the CMHC report have average private rents for one-bedroom units that are affordable to someone making minimum wage.)

ONPHA will be releasing its 2015 Waiting Lists Report in mid-May. This annual report gives an estimate on the number of households in Ontario waiting for rent-geared-to-income assistance based on waiting list numbers for each of Ontario’s 47 service manager areas. At the end of 2013, there were 165,069 households on waiting lists for housing assistance.

Is your city inclusive?

*NOTE: These figures reflect average rental rates for privately-built apartments in buildings of three or more units. The average includes rents from both the high and low end of the rental markets. It’s also worth noting that these averages report for a census agglomeration (CA) or census metropolitan area (CMA), which may stretch to include both a city and its surrounding area. For example, the Toronto CMA includes Mississauga, Brampton, Vaughan, Richmond Hill, Oakville, Ajax, Pickering, Milton, and Newmarket. Including these suburban communities suggests that the average private rent for a CMA is lower than the average private rent for a city’s downtown.