Posted by Staff on May 2015 in Advocacy, All Stories, Slider | 0 comments 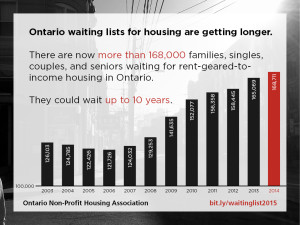 The 2015 Waiting Lists Survey, released this week, shows that there were 168,711 families, seniors, single adults and couples waiting for rent-geared-to-income (RGI) housing across Ontario at the end of 2014.

The latest figures reveal that there were 3,642 more households waiting for RGI housing in 2014 than in 2013. More than three per cent of all Ontario households have applied for housing. For the second year in a row, these households faced an average wait of nearly four years.

“The data show that we need a sustained investment in housing from senior government because local government can’t do it alone,” said ONPHA Executive Director Sharad Kerur. “Otherwise, we can expect the numbers to continue to increase despite municipalities’ best efforts.” 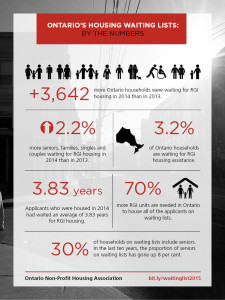 “The cost of housing continues to rise across the province,” added ONPHA President Keith Hambly. “More people are finding themselves caught in the housing crunch, which negatively impacts virtually every area of a person’s life, and makes it nearly impossible for families to escape poverty.”

This year’s Waiting Lists Survey Report features stories of Ontarians who have struggled to find an affordable home. Their experiences offer insight into the compounding difficulties caused by insufficient housing, from health to employment opportunities, and reveal the depth of Ontario’s current affordable housing crisis.

ONPHA has reported annually on the number of households waiting for RGI housing since 2004.