Categories Menu
Home » All Stories » It started with a tennis court

Posted by Staff on Jul 2015 in All Stories, Features, Slider | 0 comments

It started with a tennis court 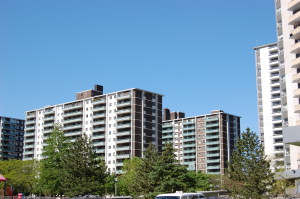 St. James Town, located in the northeastern corner of downtown Toronto, is the largest high-rise community in Canada, as well as the country’s most densely-populated neighbourhood. The neighbourhood was first developed in the 1950s and 1960s for young, middle income people to live in apartment towers close to downtown. By the 1970s, the original residents left for the suburbs and the community became home to an influx of new Canadians and social housing tenants.

St. James Town has been identified as a key newcomer neighbourhood by the City of Toronto, which means that more resources have been concentrated in the community. In recent years, the area has been undergoing a revival and, today, the neighbourhood is studded with construction cranes, which will bring new residential towers, storefronts and amenities to this rapidly changing community. 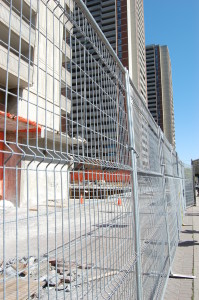 The St. James Town Youth Council (SJTYC) was formed in 2008 with the support of the Yonge Street Mission. Today, the council has 20 members between the ages of 13 and 21. Recently, SJTYC members hosted a Jane’s Walk tour to showcase the change happening in their neighbourhood. ONPHA reached out to the SJTYC to discuss its work in the community and council members Sumitha Sivagnanasundram , Suo nan ji, and Junnat Sheikh (grades 12, 10 and 9, respectively) offered to take ONPHA staff members on a street-level tour of St. James Town.

We met the council members at a busy Tim Hortons store on Bloor and Sherbourne, and then traveled south into the neighbourhood. At nearly every intersection we pass, cranes are in operation and construction barriers are set up; St. James Town is developing at a brisk pace. As we walk, our tour guides are keen to point out their favourite shops and community spaces along the way, like Art City, a centre that delivers free after-school arts programs to local children and runs pick-ups from local schools. 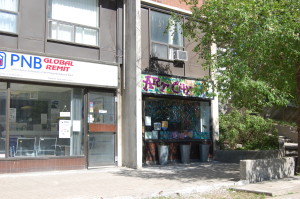 The importance of art is a running theme in St. James Town. Sumitha points out the many examples of street art that, “add a little bit of life to the neighbourhood.” Among these is the phoenix-inspired mural at 200 Wellesley Street East – the tallest mural of its kind – painted to remember the six-alarm fire that left over 1,000 residents temporarily homeless.

The Wellesley Community Centre, completed in 2005, is another group favourite and provides free and low-cost recreational programs to a wide range of residents. The Centre shares a building with the St. James Town branch of the Toronto Public Library, which has a large Chinese collection, as well as books in French, Russian, Tagalog, Tamil, Hindi, Korean, Spanish, and Urdu. 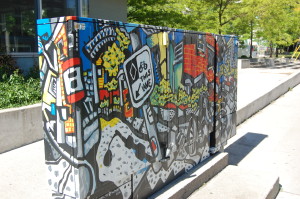 “The library is amazing – there’s a whole kids’ section,” says Suo. “That was basically my childhood.”

Suo also points out the new separated bike lanes on Sherbourne Street that make the route much safer for cyclists. “As a child, I’ve fallen over biking on the sidewalks. The posts and painted lines provide a safe barrier,” she says.

The SJTYC got its start in 2008 when “the Yonge Street Mission initiated it as an asset-based community development project of ‘youth helping youth’,” says Sumitha. The group began with five members, and grew to 20 within five years. The council works to engage the youth in their community who, Suo says, have a “shared experience” as many community residents are immigrants. Outreach at high schools, and participation in organizing community events help them to gain new members, many of whom choose to engage with the council on their own time, rather than as part of their volunteer requirements for high school credit. 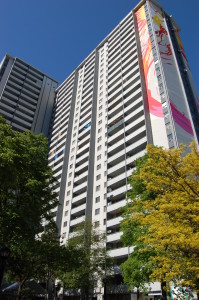 “There is definitely a negative connotation about [St. James Town] from outside people,” says Sumitha, “but we are a close-knit community with lots of diversity and togetherness.” She points to the community hubs that help make the neighbourhood so vibrant and cohesive, “there [are] lots of resources for everyone.”

The Council, having achieved its first goal of raising funds to revitalize the local tennis court, has many ongoing projects like ‘Camp Reality’, a March break camp for local youth that allows them to explore career opportunities. The group also organizes trips to university campuses, such as the University of Waterloo, which many residents may not be able to visit otherwise. ‘Kids Pack’ is another of SJYC’s initiatives; it provides 100 backpacks per year to local children.

The community has been positive about the group’s work, Sumitha says. “They see that youth are taking a leadership role and making an impact.” The Council provides a positive model for youth in other communities as well. 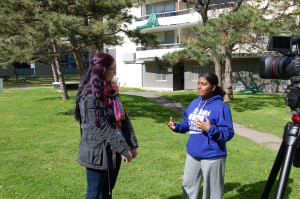 “It’s definitely a start to get to know your community, get to know the people and if you have an idea go forward with it,” Sumitha says, “even if you have a small idea it’s possible to do it.”