Posted by Staff on Aug 2015 in All Stories, Features, Slider | 0 comments 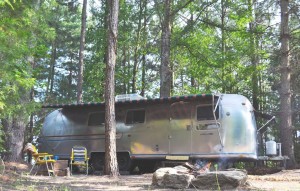 In 2013, blogger and librarian Melanie Gnau and her husband moved into an Airstream trailer, which they keep parked on family property in North Carolina. ONPHA interviewed Melanie to learn some of her tricks for living small.

My husband, George, myself and our dog, Bambi live in a 1978 Airstream Sovereign. It’s a 31 foot tin can with about 188 square feet of indoor space.

Prior to living in the Airstream, we lived in a 1,200 square foot, overpriced loft. It was big and beautiful, but it was also eating over half of my paycheck each month. We were living in a small town so there were very few homes or apartments to rent.

It was a culmination of things. In May 2013, my husband George and I were at a crossroads. At the time he was a school teacher and I was a librarian. We were newly married and I had just landed a new job closer to our families.

Before and after: kitchen and workspace in the Airstream. Copyright Melanie Gnau.

We were also broke. We didn’t have an extravagant wedding by any standards, but we did spend the majority of our meager savings on the event. At the time I had also landed a new job in a new area and we were hoping that George could take the leap from teaching to full-time art work. We took a look at our budget, started looking at apartments in our new area and we were instantly discouraged. We knew that we couldn’t get ahead financially by renting an apartment. We also knew that we wouldn’t qualify for a mortgage. We had no credit and almost no savings. We saw an endless cycle of debt in front of us and we wanted out.

One night we were lying in bed, talking about our dilemma and I casually mentioned that I had once read an article about a couple that lived in a Winnebago. George took that idea and ran with it. That night we stayed up surfing the web for travel trailers. The Airstreams we saw on Craigslist were the most appealing— they were stylish and cool and I didn’t feel like we were losing anything.

The next four months were a whirlwind of downsizing, moving, buying and fixing the trailer. In August 2013 we moved into our 1978 Airstream Sovereign.

We bought our Airstream off Craigslist for $5,000. It took about $1,500 to fix her up. That’s more than we had hoped—it was our entire savings, but in the meantime we had sold the majority of our belongings for a profit so it all worked out. 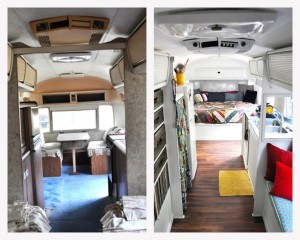 Before and after: bedroom and workspace in the Airstream. Copyright Melanie Gnau.

Our Airstream was fairly structurally sound, but it required a lot of cosmetic work. But George is handy and I am crafty. We’re a good team. It took months of working in the southern sun to get her to our standards. George endured an epic bout of poison ivy from clearing the land our trailer sits on and I had so much paint in my hair that I had to cut it out. We cleaned out rat’s nests and bleached old smoke stains. We pulled up moldy carpet and we laid new floors. We painted so many coats of paint, we built our bed, a desk, a bench and a shelving unit. We sewed curtains and a bench cushion. We replaced the window screens and the fridge. I also learned that I love to caulk and I proceeded to caulk every tiny hole and crevice in the trailer. Ha-ha! It was extremely challenging and extremely rewarding.

Challenges come up often. We meet them as they come. Our air conditioner and our hot water heater have both broken which have been expensive challenges. There’s also daily challenges. Little things can be frustrating in the trailer, but we’ve really learned how to work around them. We can’t have too many things plugged in or running at one time. We have to be very mindful of the hot water. There are times when I really just want to take a long bath and listen to the hum of a dishwasher, but I don’t have a bathtub or a dishwasher. We also have to be very mindful of the things that we bring into the trailer. There’s only 188 square feet, so if we bring one thing in, something else needs to come out. That’s not so much of a sacrifice for me. I like living with less. But it can be hard on my husband because as an artist he sees usefulness in everything.

I’ve learned that there are very few things that you actually need. If you go around your house for a week and put stickers on the stuff that you used, you’d see that the things that you genuinely need are just a fraction of your home.

I think that a lot of people are saying “enough is enough.” We have enough stuff. We don’t have enough time with our families or even just time to relax. Tiny home living offers the appeal of more time. Less stuff means less cleaning, less to stuff to manage and less stuff to pay for. Unfortunately right now, living in a tiny home is illegal in many places. They don’t meet minimum square footage standards or they don’t fit neatly into zoning categories. To have lasting impact, tiny homes and alternative dwellings need to be legal.

Living in an Airstream has given me so much. It’s helped, financially, obviously. Since moving into the Airstream, George and I have been able to travel to Portland, Memphis, Austin, Charleston, Toronto, Niagara Falls and we took a road trip to Florida. I’ve also managed to save about half of my paycheck each month. I now have emergency savings, a 401k and a Roth IRA. I didn’t even know what those things were a few years ago!

Small living has also made me more resilient. I know that there are solutions to problems and I can do so much more than I (or other people) think I can. It’s taught me so many lessons.