Posted by Staff on Dec 2015 in All Stories, Features, Slider | 0 comments

Each year ONPHA recognizes organizations and individuals that have made important contributions to their non-profit housing communities. At the 2015 ONPHA Conference, Awards for Innovation, Excellence, Outstanding Leadership, Tenant Achievement and Lifetime of Service Recognition were presented, and the winners of the 2015 Kathleen Blinkhorn Aboriginal Student Scholarship were announced. 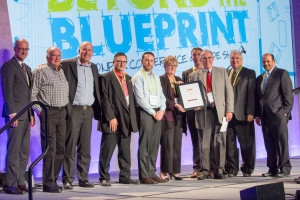 The Innovation Award, which recognizes a non-profit housing provider that finds creative and innovative ways to make a positive impact on their community, went to the Physically Handicapped Adults’ Rehabilitation Association (PHARA). PHARA was recognized for their work in Thessalon, where they transformed a long-term care facility into accessible apartment units for residents with disabilities, which helped create a medical and community hub.

Peel Living, which is the third largest social housing provider in Ontario, received this year’s Award for Excellence. The Awards Committee was impressed with Peel Living’s commitment to youth engagement through the creation of employment and community opportunities for young people.

Lorraine Bentley, the Executive Director of Options Bytown, was awarded the 2015 Sybil Frenette Outstanding Leadership Award. Ms. Bentley has over 30 years of experience promoting housing options for marginalized individuals, addressing homelessness with other community agencies and the City of Ottawa, and has led a number of innovations and partnerships at Options Bytown over the past 15 years.

Tenants are essential to vibrant non-profit housing communities. This year, Helen Landry of Brockville Municipal Non-Profit Housing Corporation, Harold Roebuck of Central King Seniors Residence in Toronto, and Chantal Hurtubise and Danny Roberge of Ottawa Community Housing received Tenant Achievement Recognition Awards for contributing their time and energy to improving their communities. The tenant winners have demonstrated their dedication to their neighbours by organizing tenant meals and social events, advocating for community improvements, and assisting and inspiring o 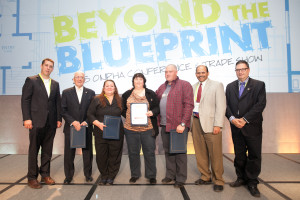 ONPHA recognizes five exceptional students each year through the Kathleen Blinkhorn Aboriginal Student Scholarship. Aboriginal students who are living in non-profit housing and enrolled in post-secondary education program are eligible for the Scholarship. This year’s winners are: Sara Cotter, who is beginning a program as a Law Clerk at Niagara College; Erica Doxtator, who is attending Osgoode Hall Law School; Geoffrey Goodson, who is also attending Osgoode Hall Law School; Lisa Osawamick, who is pursuing her Master’s of Social Work degree at Wilfrid Laurier University; and Andrea Pitawanakwat, who is enrolled in the Child & Youth Worker program at George Brown College. Each student received $1,000 to assist with their education costs.

ONPHA would like to acknowledge Enbridge Gas Distribution, Prentice Yates and Clark Chartered Accountants, Morneau Shepell, GSC, and Yardi for their generous sponsorship of the 2015 Awards program. We would also like to recognize Union Gas for their valued sponsorship of this year’s Kathleen Blinkhorn Aboriginal Student Scholarship.