Categories Menu
Home » All Stories » A good cause is not enough: How Building Up became a profitable non-profit

Posted by Staff on Mar 2016 in All Stories, Features, Slider | 0 comments

A good cause is not enough: How Building Up became a profitable non-profit 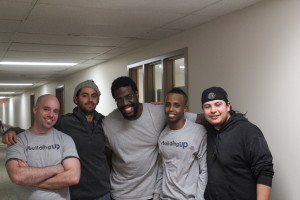 tently having staff turnover every four months. For most organizations, this would be a clear indication that something is not working. For Marc Soberano of Building Up, it’s a sign of success.

“If you have 100 per cent retention, you’re not hiring people that really need it,” explains the 26-year-old Executive Director. “It’s a balance. Some people will say they’ve tried it for a few months and decided trades are not for them. It’s still a success as it means they’ve learned something.”

Building Up is a social enterprise that provides training, education, and work experience to people with barriers to employment. Plumbing upgrades are installed by participants through educational work programs, which help save on water consumption for non-profit housing organizations. The non-profit model shows how a charitable mission can still generate healthy profits by being a competitive industry player.

While working at Ashoka Canada, an organization that funds social enterprises, Soberano recognized the connection between non-profit housing providers’ high maintenance costs and their residents, who often need employment opportunities. Fresh from studying business at the Western University, he developed an interest in innovative business models with a social impact.

Soberano was particularly intrigued by an application for BUILD Inc., an emerging organization from Winnipeg. So much so that he left his job and spent three weeks with the founder, to shadow the staff and learn how everything worked. BUILD provides insulation, plumbing renovations and other services to Manitoba Housing, while training residents and matching them to new employers. After his observation period, he was ready to bring the concept to Toronto.

“Non-profit housing has so much work that needs to be done, and so many people living in the buildings who need training, I wanted to match the work that needed to be done with the needs of people,” says Soberano.

In the beginning, it was all about toilets. 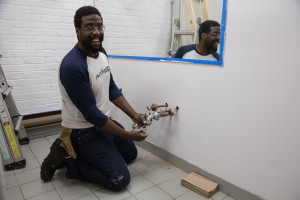 Soberano knew that for this business model to be successful, he needed to offer an area of expertise that would benefit non-profit housing, rather than hope housing providers would hire Building Up because of its non-profit mandate. “You can’t expect people to support you just because you are doing something nice,” he cautions. He was confident that a water-saving service would be in high demand, providing a business model around which he could train and employ people.

“Toilets are a specific opportunity that arose,” says Soberano. “Buildings are able to save so much by upgrading toilets, shower heads, and faucet aerators.”

Because non-profits are able to realize savings so quickly, his services are an easy sell, even to organizations on a small budget. This in turn generates profits to fund in-class programs for Building Up’s participants that help them bridge the gap to independent employment. Programs include math literacy (in partnership with Jump Math), résumé building, and essential skills for trades like workplace health and safety, first aid, and working with heights.

The program lasts for four months, with two months in class and two months working in the field. After completion, successful participants are connected to apprenticeship programs to help them continue in the trade. Often, they are hired by unions and see their income rise significantly.

Having a large roster of staff helps Building Up be flexible with schedules and avoid interrupting service if someone drops out of the program. Soberano and his team actively recruit trainees through various locations where people are seeking work such as Employment Ontario, by hosting information sessions and community organizations that work with people seeking employment.

There are only three requirements for applicants to be accepted in the program. First, there is something going on in their life that is keeping them from getting work without this sort of intervention. Second, they have a clear desire and motivation to come out of that situation and are willing to take advantage of an opportunity. Third, participants must have a genuine interest in the trades. “It’s not just four months of work,” Soberano elaborates. “We’re trying to set folks up with a career, so having an interest in the trades is really important.”

The outcomes of Building Up’s programs can extend beyond immediate employment. “We do soft skills training, like financial management,” adds Soberano. “We’ve had participants say they feel empowered. They have something they can tell their kids about.”

The success of the plumbing upgrades has led Soberano to gradually expand into new areas. The organization has done bathroom and kitchen renovations, and recently started an all-women painting crew. More projects create more experience for the participants, and in turn, more opportunities to learn what they like and don’t like. As long as the venture is financially sustainable, Soberano and his team are open to new ideas.

“A really big piece of it is to make sure you have a good business and the social piece is something you can add on.  If you’re not offering something competitive that people are willing to pay for, you’re not going to keep anyone employed for that long.”

Building Up is an ONPHA Best Deals partner. Toronto-area members can receive a free assessment and report to find out how much they can save and how quickly it can pay back by calling (647) 993-5507.