Posted by Staff on Mar 2016 in Advocacy, All Stories, Features, Slider | 0 comments

Rising food prices are hard on tenants, especially in the North 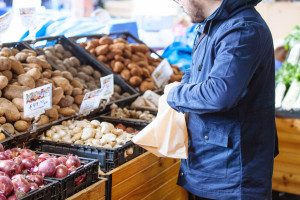 Families are feeling the effects of Canada’s economic downturn each time they walk the aisles of the grocery store. In January, the Canadian dollar dropped to below 71 cents USD – the lowest rate in over a decade. As our dollar weakens, the cost of goods that we bring into the country continues to climb.

This is especially true for fruits and vegetables, the majority of which are imported from the U.S. In 2015, the cost of fruits and vegetables rose between nine and 10 per cent, while the cost of meat rose by five per cent. And prices aren’t going down any time soon. According to a recent report, the average Canadian household should expect to spend $345 more on groceries this year than they did in 2015.

Households in non-profit housing communities are often living on a low-income. Low-income families spend a much larger percentage of their income on food than higher-earning ones, meaning that they are more vulnerable to price changes. An increase in food costs is likely to have a large impact on the ability of families, seniors, and single adults to afford adequate food for a healthy diet. Because rent and other bills are fixed costs, they often get taken care of first, while money for food often runs out before the end of the month.

As food prices in Northern Ontario communities are already more expensive than in the rest of the province, these resident are likely to be particularly affected by rising food costs. In Kenora and Rainy River, for example, it costs approximately $1,061 per month to feed a family of four, compared to $861 in London and $847 in Toronto.

Volker Kromm is the Executive Director of the Regional Food Distribution Association (RFDA). Based out of Thunder Bay, the RFDA is the designated hub for charitable food distribution in Northwestern Ontario, and supports over 30 food banks and feeding programs. “As the prices go up, the people we’re familiar with came to food banks and programs more often,” Kromm says. “But now with the drastic increase, we’re also seeing lots of new faces.” Kromm says there’s been a significant increase in the number of seniors using the programs, as well as young families that are struggling to survive on low salaries from retail work.

According to Kromm, many residents try to accommodate higher food prices by changing their diets. “They cut out the meat, then cut out fruits and vegetables – and try to rely on high-carbohydrate foods, because those are the cheapest,” he says. But even after making these sacrifices, many families cannot get by. “They need a house, they need to pay their heating bill – so food is the thing that they cut out [of their budget].”

Rural areas that are isolated, such as some First Nations communities, are disproportionately affected. “In many communities products have to be flown in, so there’s a premium on bringing in food,” says Kromm. “When prices go up by 14 per cent in urban areas, it ends up being double or triple that in a remote community.” This year’s warm winter has made food transport even more difficult, as areas that can be accessed by truck when the routes are frozen can currently only be reached by air, increasing the cost of food even more.

According to a 2013 report, increasing the ability to access healthy and nutritious food – often referred to as an individual’s “food security” – results in healthier tenants and more stable and prosperous communities. While the burden of high food prices is unlikely to let up any time soon, housing providers can help by connecting tenants with food banks and feeding programs in their local area. At the same time, housing providers can pursue partnerships with local food organizations to explore new solutions to food security, such as building community gardens, establishing bulk food buying clubs, hosting local food markets, and connecting tenants to affordable meal delivery programs.

At the RFDA, Kromm has found significant value in partnerships with other organizations. So far he has partnered with community leaders, the Red Cross, Breakfast Club programs, and First Nations groups, but would like to work with housing providers as well. “We can achieve economies of scale together,” he says. “The more organizations that are sitting at the table, the better.”