Posted by Staff on Apr 2016 in Advocacy, All Stories, Features, Member Support | 0 comments 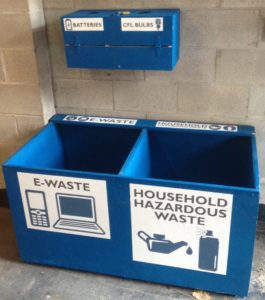 The life of garbage can be oddly fascinating: once it’s been thrown in the bin and picked up by collectors, its former owners rarely give it another thought. And yet, it continues to exist, and in many cases, poses a challenge for the people who are tasked with sorting it and putting it somewhere.

Old computers and electronic devices are often sent overseas to places like India, China, and Africa, where people are exposed to their toxic metals. David Boushey, maintenance supervisor at the Centretown Citizens Ottawa Corporation (CCOC), saw the harsh reality of consumer waste while visiting Mumbai, India. He had the opportunity to meet a 17-year-old who, like many youth in the area, spent his life sorting through old computers for parts to sell, without knowing the long-term impact that this would have on his health.

CCOC decided to do its part to minimize tenants’ electronic and hazardous waste impact on the environment. While Ottawa residents can dispose of their light bulbs, batteries, and solvents at municipally-operated sites, the locations are not accessible by transit and are difficult to access for CCOC tenants. Earlier this year, CCOC began a program to help tenants depose of their waste responsibly. “We have bins set up, and tenants can call to have stuff picked up,” says Meg McCallum, Manager of Membership and Communications at CCOC. “We collect and store the waste at a central depot, sort it, and take it to appropriate place.”

The plan to bring hazardous waste collection in-house began in 2007, when CCOC started developing its Beaver Barracks property. A team of tenants was assembled to advise on how to focus green initiatives. One of the programs they were interested in was the collection of hazardous waste. However, at that time, there were too many legal barriers and hurdles to implement the idea. Furthermore, CCOC would need to be a commercial waste hauler to be allowed to carry out the disposal.

Luckily, recent changes in provincial legislation have made it possible. “The first thing to do was to talk to our insurance company to see if they would have a problem with it,” explains McCallum. “Their response was because the materials are consumer products, they probably would end up thrown into regular garbage anyways. So it didn’t change any risks associated with building.”

As the initiative is still in its early stages, the organization is monitoring participation and the financial impact. McCallum is expecting the result to be a slight increase in overall costs: the work is being done with existing resources and required small startup costs for the bins and signage. While Ottawa-based housing providers do not have a financial incentive to reduce their garbage, CCOC’s staff and tenants welcome the ability to reduce their environmental footprint. Tenants were informed about the new disposal process using posters around the building with clear pictures and received a letter written by CCOC’s sustainability coordinator. The letter outlined the dangers of hazardous waste ending up in a landfill and also describes Boushey’s experience in India.

“This is why we’re doing it,” emphasizes McCallum. “It’s really important, and so easy to do the right thing.”