Posted by Staff on Apr 2016 in Advocacy, All Stories, Features | 0 comments 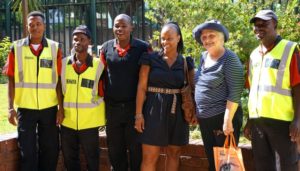 Just over a year ago, I was privileged to be part of a team of five non-profit and co-op housing representatives that visited South Africa. Each of us returned to Canada with tales inspired by what we had witnessed. Rooftops Canada, the international development program of Canada’s social and co-op housing organizations, organized this study visit to South Africa and Kenya, which was co-hosted by their partners in Nairobi, Johannesburg, and Cape Town.

The city of Johannesburg and the surrounding townships are full of jarring contrasts. There are modern hotels where we were told not to leave unescorted; thriving commercial districts teeming with shops and people, and abandoned modern sky scrapers with no electricity or water that have been ‘hijacked’ by gangs. Townships, some still with unpaved roads, are linked to the city by modern mass transit. The legacy of Nelson Mandela is proudly told in signs on streets of Johannesburg. A notorious prison that once held Gandhi and Mandela is preserved next to the constitutional court – the crown jewel of the victory over apartheid and a powerful symbol of the triumph of human rights and democracy in South Africa. The country has achieved massive change in 20 years, but not without growing pains. There is still a lot of work ahead, including an ambitious housing agenda to address a massive deficit of adequate housing.

While there, we were fortunate to meet with the National Association of Social Housing Organizations (NASHO), and some of their members. We met at Madulammoho Housing Association, a housing and service provider that adapted a former nurses’ residence for affordable housing in Hillbrow, one of the toughest inner city neighbourhoods in Johannesburg. Among all the social housing providers and partner agencies we visited, the most memorable encounter was with Josie Adler, the founder of eKhaya security. This spry senior and her team are reclaiming one of the most dangerous neighbourhoods in Johannesburg, building-by-building, block-by-block.  She is an inspiration; I think Jane Jacobs and Saul Alinsky would be proud.

Some of the challenges we heard about from housing providers were unique to their environment: problems collecting rent in a society where rent strikes are used as a form of protest, where the government provides free homes to eligible families, and building bridges among tenants of different ethnic groups where there is no history of living together. Another unfamiliar story was about the challenges facing rapidly expanding social housing agencies – something Canada hasn’t experienced since the 1980s.

Touring social housing developments in Johannesburg and the surrounding area, I was struck by the similarities between South Africa and Canada, despite such different contexts. Not only does social housing look similar in form and size, many stories from housing providers about infilling underdeveloped sites, property management challenges, creating tenant associations, and balancing budgets were the same as you might hear at home. I came away from the tour impressed by the long history of peer exchange, made possible through Rooftops, between Canadian non-profit housing providers and South African non-profit agencies on issues including social housing management, strategic planning, and social housing finance.