Posted by Staff on Jun 2016 in Advocacy, All Stories, News Updates, Slider | 0 comments 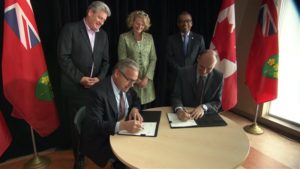 OTTAWA, June 21, 2016 – The Ontario Non-Profit Housing Association (ONPHA) welcomes this morning’s announcement from the Honourable Jean-Yves Duclos, Minister of Families, Children and Social Development, and the Honourable Chris Ballard, Ontario’s Minister of Housing, regarding new funding for the creation of affordable housing. ONPHA member the Centretown Citizens Ottawa Corporation hosted the event at their Beaver Barracks location, where the Ministers committed to doubling the current funding levels for the Investment in Affordable Housing (IAH) Program to more than $336 million over the next two years.

The IAH Program is a joint federal-provincial commitment to improving access to affordable housing that is sound, suitable and sustainable for households across Ontario. First launched in 2011, the IAH Program was extended for another five years in 2014. Tuesday’s announcement will result in greater investment in the creation of affordable housing, repairs and retrofits and homeownership assistance.

Minister Duclos also announced the allocations for Ontario that were mentioned in the 2016 Federal Budget. These allocations include $67.2 million for the creation of affordable housing for seniors; $27.9 million for shelters and transitional housing for households that have experienced domestic violence; and $209.4 million for repairs and energy efficiency in social housing communities.

“After years of declining investment, it’s encouraging to see Ottawa step up now and acknowledge the government’s role in ensuring that Canadians have a safe and secure place to call home,” said ONPHA Executive Director Sharad Kerur. “The IAH Program is an important tool for increasing the supply of affordable housing, and a good start in investing in the social housing assets we already have. ONPHA’s members look forward to an even greater investment  to address the capital repair backlog in social housing communities and ensure that non-profit housing providers can remain viable for future generations.”

“The federal government has committed to developing a National Housing Strategy. As a downpayment of more investment to come, today’s announcement is a great signal” added ONPHA President Meg McCallum. “Access to an affordable home is essential to helping families and individuals escape poverty. Non-profit housing creates vibrant communities where households of all income levels can achieve their full potential.”

ONPHA is home to more than 700 non-profit housing providers. From Windsor to Cornwall, Toronto to Thunder Bay, our members house more than 400,000 people in 163,000 homes across 220 Ontario communities. They are a critical part of the fabric of every community and provide decent, affordable homes to low and moderate income households. Many of our members provide specialized housing and support services for Ontarians who need help to enjoy a successful tenancy.