Posted by Staff on Jul 2016 in Advocacy, All Stories, Features, Slider | 0 comments 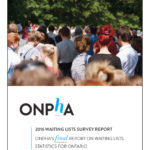 ONPHA’s annual Waiting Lists Survey Report was released on May 25, revealing that 171,360 households are waiting for rent-geared-to-income (RGI) housing in Ontario. These households face an average wait of nearly four years across the province, with significantly longer wait times in urban areas.

The Report received coverage in a number of Ontario publications, including an exclusive in the Toronto Star that was followed by an editorial calling for increased investment in affordable housing solutions.

“It has long been understood that having an affordable place to live is key to freeing someone from the grip of poverty,” the editorial noted.

“With any luck, this week’s grim statistics will mark a turning point for Ontario’s poor.”

Since ONPHA began collecting data in 2003, the waiting lists have increased by more than 45,000 households. Senior households are a growing presence on the lists; originally accounting for one-fifth of all applicant households, seniors now make up one-third. Of all household types, seniors now face the longest wait, with average wait times of 4.4 years province-wide.

While waiting lists have increased over the past decade, housing policies and programs have also changed. RGI housing is no longer the only form of housing assistance available, and local governments are implementing new and innovative programs. These locally-responsive initiatives reflect community need, but prevent cross-jurisdictional comparisons.

Why is this the final report?

While ONPHA’s Waiting Lists Survey Reports have effectively raised the public’s awareness of the province’s affordable housing crisis, this year’s Report is the final instalment in the series.

“Continuing the report would mean risking comparing apples to oranges.”

New developments, like the Government of Ontario’s update to its Long-Term Affordable Housing Strategy (LTAHS) and the federal government’s commitment to a National Housing Strategy, provide opportunities for investment in the growth and sustainability of the non-profit housing sector. Going forward, ONPHA will continue to conduct research on housing trends and advocate for investment in affordable housing by all levels of government.