Posted by Staff on Jul 2016 in All Stories, News Updates, Slider | 0 comments 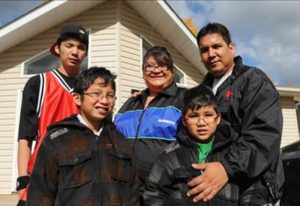 In recent months, the housing and health needs of Indigenous communities both on and off-reserve have gained more traction as political priorities. Both the federal and provincial governments have acknowledged the important role Indigenous housing plays in building strong communities, and are reaching out to engage with Indigenous organizations.

In March, the Ontario Government committed to developing an Indigenous Housing Strategy in the Update to the Long-Term Affordable Housing Strategy (LTAHS). This strategy will be developed in partnership with Indigenous organizations with the aim of developing culturally-appropriate housing and homelessness services.

The Province has also identified Indigenous homelessness as one of its four priority areas in its commitment to ending chronic homelessness in the next decade. Consultations and outreach on these initiatives is expected to begin in the coming months.

More recently, Premier Kathleen Wynne delivered Ontario’s response to the 2015 report from the Truth and Reconciliation Commission. In addition to offering an apology to Indigenous Peoples in Ontario, Wynne committed $250 million in funding over a three-year period for reconciliation initiatives. While some of the funding will go towards improving services and opportunities in on-reserve communities, other programs will be open to all Indigenous Peoples. These initiatives include:

The Province has also adopted the term “Indigenous” for use in government policies and programs, and officially renamed the Ministry of Aboriginal Affairs as the Ministry of Indigenous Relations and Reconciliation.

The Province also recently launched the First Nations Health Action Plan, which includes $222 million in funding. While the majority of the money is allocated to improve access to physical and mental health supports on-reserve, the Plan promises to also invest in culturally-appropriate Indigenous health services across Ontario such as primary care, home and community care, and diabetes prevention.

The federal government has also signaled a clear commitment to Indigenous Peoples. In the Trudeau administration’s first budget, a five-year investment of $8.4 billion was allocated for infrastructure, services, and supports for Indigenous communities.

Much of the funding will go toward improving schools and education resources, building child care centres and nursing stations, and addressing water quality on reserves. The funding also included $739 million for new and renovated housing on reserves, and in Northern and Inuit communities.

Going forward, the challenge will be to ensure that the federal government also invests in affordable housing for Indigenous Peoples living in urban environments. With the majority of Indigenous Ontarians living off-reserve, investments in culturally-appropriate Indigenous non-profit housing and homelessness solutions must be prioritized.

As the Feds engage in consultations for the development of a National Housing Strategy, the Canadian Housing and Renewal Association’s Aboriginal Caucus and ONPHA’s Urban Aboriginal Housing Advisory Committee will work to ensure official recognition and support for urban Indigenous housing organizations.