Posted by Staff on Dec 2016 in All Stories, Features | 0 comments 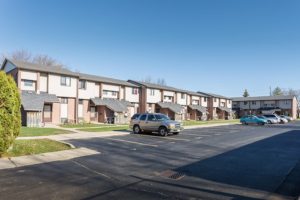 As part of Ontario’s Climate Change Action Plan, the provincial government has made targeted investments towards social housing retrofits to improve energy efficiency and reduce greenhouse gas emissions. In February 2016, the government announced that $92 million would be dedicated to this initiative, resulting in the creation of two funding programs:

1. Social Housing Apartment Retrofit Program (SHARP):
$82 million supported energy retrofits in apartment buildings with 150 or more units. Recipients were able to use these funds for initiatives such as installing energy efficient boilers, windows and lighting, and insulating outer walls or mechanical systems.

The Eastwood Housing Corporation, located in St. Thomas, received $685,706 in SHEEP funding in support of their green initiatives. Established in 1982 by the Eastwood Fellowship Baptist Church, Eastwood Housing is now the second largest housing provider in Elgin County. Their 270 units include apartments in three seniors buildings and multiple single-family homes located at five separate complexes.

When Elgin County received their SHEEP funding of $791,533, close to 90 per cent was allocated to Eastwood Housing. Having secured these funds, plans were made to retrofit 37 of their single-family homes. These homes, previously heated by electric baseboards, would be upgraded with full heat pump systems and new windows. Eastwood Housing was also able to stack funding they had received through the Social Housing Improvement Program (SHIP) onto this initiative and include unit door replacements as part of the same project.

Jon McCurry, Administrator of Eastwood Housing, said that their experience has been extremely positive, and they are grateful that this funding has given them the opportunity to undertake important upgrades that would have otherwise taken years to complete.

Eastwood Housing was selected for Elgin County’s SHEEP funding because the majority of their tenants in family complexes pay their own utilities, a requirement for the program, plus they were prepared to act quickly when the funding was announced. Jon shared with ONPHA his top three tips to help fellow housing providers access green funding:

To date, Eastwood Housing has completed the work in 14 homes located in their “Village Phase 2” complex.  Jon said the tenants have been thrilled with the upgrades. Although it’s still too early to compare savings against last year’s bills, they are expected to be significant as the pre-energy audit showed that the old heating systems used the most energy.

The 23 homes still waiting for retrofits are located at “The Court”, another one of Eastwood Housing’s family complexes. When ONPHA spoke with Jon on December 12th he said that work on this second phase had begun just that morning, right after they had finished digging out from their first snowstorm of the year!

ONPHA thanks Eastwood Housing for sharing their experience, and we wish them all the best as they complete the project.

If your organization has received SHEEP or SHARP funding we would love to hear about it, and to feature your project in Quick Connections. If you have a story that you’re willing to share, please get in touch with us by email at policy@onpha.org or by phone at 416-927-9144 or 1-800-297-6660.