Posted by Staff on Apr 2017 in News Updates, Slider | 0 comments

A missed opportunity for non-profit housing: ONPHA’s response to the 2017 Ontario Budget 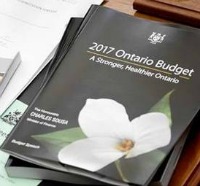 On April 27, 2017, the Ontario Government released their 2017 Budget, “A Stronger, Healthier Ontario”. As expected, the Liberals delivered the first balanced budget in close to a decade, with forecasts for more balanced budgets over the next two years.

The recent focus on housing affordability in Ontario, coupled with historic commitments made by the federal government a few weeks ago, made ONPHA hopeful that the 2017 Budget would introduce sufficient new funding for Ontario’s non-profit housing sector and its current, and prospective, tenants.

Ultimately, however, the government’s new housing measures veered towards private sector initiatives such as taxing speculative home buyers and implementing rent controls, leaving low- and moderate-income Ontarians with many unanswered questions about how their housing affordability challenges will be met.

In ONPHA’s opinion the 2017 Budget does not do nearly enough to mitigate Ontario’s housing affordability crisis, or to increase support for vulnerable tenants. While the document does include some promising developments for individuals with low- and moderate-incomes, housing related investments are limited, and the majority of them are simply restatements of the inadequate commitments that have already been made.

Here are the top things that ONPHA thinks non-profit housing providers should know about what was, and wasn’t, in Budget 2017:

Leading up to the Budget, the government introduced Ontario’s Fair Housing Plan which included 16 measures aimed at cooling real estate markets, increasing rental housing options, and strengthening tenant protections. The components of the plan, which were detailed further within the Budget, include actions to address ownership demand through two different types of taxes. First, a Non-Resident Speculation Tax of 15% that would be levied against home purchasers in the Greater Golden Horseshoe who are not citizens or permanent residents of Canada. Second, a Vacant Homes Property Tax that could be used as a tool (in Toronto, and potentially in other jurisdictions eventually) to encourage property owners to sell unoccupied units. Also included are proposals to incent increased rental housing supply through a $125 million commitment for development charge rebates, and measures to ensure fair municipal taxation rates for multi-residential buildings.

In terms of strengthened tenant protections, the government is proposing several amendments to the Residential Tenancies Act that are detailed further in proposed legislation that was released earlier this week. Most notably for non-profit housing providers, proposed amendments include the introduction of a standard lease and long-awaited exemptions for transitional housing providers for up to 4 years.

An additional part of the Fair Housing Plan is the establishment of a program to strategically leverage provincial land assets, which we got more details about in the 2017 Budget. Ontario has indicated that they are introducing this program to address the limited capacity for construction in the not-for-profit housing sector, and to build more affordable housing units across the province. This approach will be piloted starting in spring 2017, and a key element of the initiative will be the inclusion of support services to meet community needs. The provincial government says they will commit land worth between $70 to $100 million that is located at multiple sites in the GTA and Hamilton. The pilot program will aim to develop up to 2,000 new units, both market and affordable.

ONPHA recommended leveraging provincial lands for affordable housing development in our pre-budget submission so we were pleased to see its inclusion. However, we are confused about why it is being structured as a limited pilot, and we have questions about whether the pilot will be dedicated to non-profit housing organizations only, or whether private developers will also be eligible to participate.

ONPHA has long advocated for increased funding to improve energy efficiency in social housing buildings, so we are pleased that the Ontario government has responded to these calls. Ontario’s previously released Climate Change Action Plan indicated that some of the revenues gained through the new Cap and Trade initiative would be dedicated to energy retrofits within social housing buildings, and Budget 2017 revealed that $85 million will be allocated for this purpose over 2017-2018.

Many ONPHA members have benefited from previous energy retrofit programs, but past programs have only been open Ministry of Housing (MHO) programs meaning that supportive housing programs administered through the Ministry of Community and Social Services (MCSS) or the Ministry of Health and Long-Term Care (MOHLTC) were excluded. In ONPHA’s pre-budget submission we advocated for all social housing programs to be eligible for energy retrofit funding, regardless of which ministry they are funded through. When clarification around whether this would be the case was sought, government officials indicated that details about the design of this program have yet to be determined. However, given the short timeframes that have been typical of past funding programs, ONPHA recommends that all housing providers begin to position themselves to apply for energy funding that may become available.

On top of the government’s recent announcement to proceed with a Basic Income Pilot, the 2017 Budget also committed more than $480 million over four years to raise social assistance asset limits, increase income exemptions for cash gifts, and to provide 2% rate increases for Ontario Works and Ontario Disability Support Program recipients. While any increase in social assistance rates is positive, this 2% increase is a far cry from what is needed to meet the most basic needs of low-income individuals, let alone to lift them out of poverty.

Other notable developments and investments

The 2017 Budget also includes several other non-housing related initiatives that could be especially impactful for low- to moderate-income Ontarians. A few examples include:

It is also just as important to pay attention to what is not in the budget. For example, there was no new funding for social housing capital repairs despite increasing backlogs being a well-publicized and increasing issue. Further, the Budget introduced much needed funding to assist licenced retirement homes with the costs of complying with new requirements under the Fire Code. However, this funding does not appear to be available to non-profit housing providers, many of whom are dealing with the same requirements and financial barriers to compliance. Additionally, the Ontario government failed to commit to fair budget increases for supportive housing programs administered through MCSS resulting in yet another year of inequitable and inadequate funding for these programs.

The 2017 Budget indicated that the recently agreed upon health care accord with the federal government will include new funding of $4.2 billion over 10 years to be dedicated to home care and mental health initiatives. Ontario has indicated that this new funding will build upon investments already being made in these health care priorities, and ONPHA is hopeful that this could result in more supportive housing across the province.

Additionally, while no new infrastructure commitments were made in this budget, ONPHA looks forward to learning more about the federal government’s newly announced federal-provincial-territorial framework that will replace the Investment in Affordable Housing initiative when it expires in the next few years. ONPHA previously estimated that Ontario could expect to see annual federal funding of approximately $89 million for the first three years of the new investment (2019-2022). Hopefully Ontario will continue with their longstanding approach of matching federal funding when official commitments are announced.

ONPHA also looks forward to learning more about how revenues obtained through the potential Non-Resident Speculation Tax and the Vacant Homes Property Tax will be allocated. In addition, we are curious about how the increased provincial revenues from Ontario’s Land Transfer Tax will be distributed. We strongly recommend that these revenues are, at least in part, dedicated to maintaining and expanding Ontario’s non-profit housing stock.

5 Questions raised by Budget 2017 that ONPHA is seeking answers to: